Back to catch up on the reviews I should have written weeks ago when the songs were first released. I will be choosing which releases to review at random, so there will be no order to what tracks I review. I just want to get them done! First up, I have chosen DRIPPIN’s comeback from 29 June. DRIPPIN returned with the single Free Pass as their latest title track. The song is featured on the group’s first single album which shares the same name as the lead single. Free Pass is DRIPPIN’s second comeback this year, with the first being Young Blood in March of this year.

Free Pass is quite dull. No matter how times I have listened to the song since its release, I find myself distracted looking for the next song to play and pretty much forgetting the song. To me, Free Pass doesn’t offer any new or innovative. It doesn’t even ‘reinvent the wheel’. It is pretty the same as any bright concept song that is release in the Summer season. This is disappointing to a degree, given that I liked both their debut song and their last comeback. The group has so much to offer based on their previous releases, but they are only given a song like Free Pass to show off their skills. But I guess that I guess this is the song that they will use to leverage their youthfulness. Though, it is interesting as their labelmates Golden Child and formerly Infinite have had their fair share of mid-tempo pop songs released in for the Summer season. And these songs by these more senior artists have been likeable and enjoyable (i.e. Pump It Up and Man In Love to name some examples – ignore my 7/10 rating and comments in the Man In Love review, that has been bumped up to a 9/10 rating when I reviewed mini-album in which it was featured on). Free Pass just doesn’t live up to that standard set by their labelmates. Don’t get me wrong, it is an okay song. But it could have been better and been more personalised for DRPPIN. One of the reasons to why I think Free Pass doesn’t have much to offer is because it lacks any substantial hook. This instantly reduces the memorability of the song. The instrumental is bright and energetic (so I will give it that), but it doesn’t have a sense of individuality or uniqueness. It feels plain and typical. Their vocal work and rapping are so-so. Not the best, but not terrible. So I guess what I really want is some identity so that DRIPPIN could really make Free Pass their own. Currently, Free Pass is theirs but it doesn’t feel individualised.

Once again, my comments above can be reflected down here. Concept-wise, I felt they have picked the general bright youthful concept that every other male group seems to do. Nothing new. And the music video is appropriately bright. In Free Pass, the group goes on a camping trip. They leave ‘Free Passes’ around the theme park they were initially at, so I presume their crushes would find them. Though, I think they put them in places that are a bit hard to reach or not that great hiding places. I mean, hiding them in a stack of other tickets, tying them to balloons, sticking them to the bottom of a park bench, floating in the fountain where it could easily fall in the water. Not really great ways of making sure they get to the intended person. In the end, someone ended up collecting them and had them in the tent next the campfire. So no one rocked up to be with the group. And the fell asleep around the campfire. The end.

I like the energy they brought to the performance. It is a great way to portray their youthfulness. Do note that I feel the choreography tends to fair a bit better when it comes to more typical aligned comebacks, as no routine are similar. Sure, moves can be replicated and borrowed. But no sequence would be exactly the same, and hence there is that opportunity to be different. What I liked about Free Pass‘ choreography is the formations they had during the first verse. 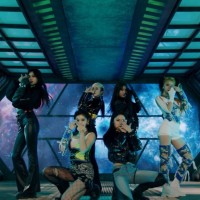