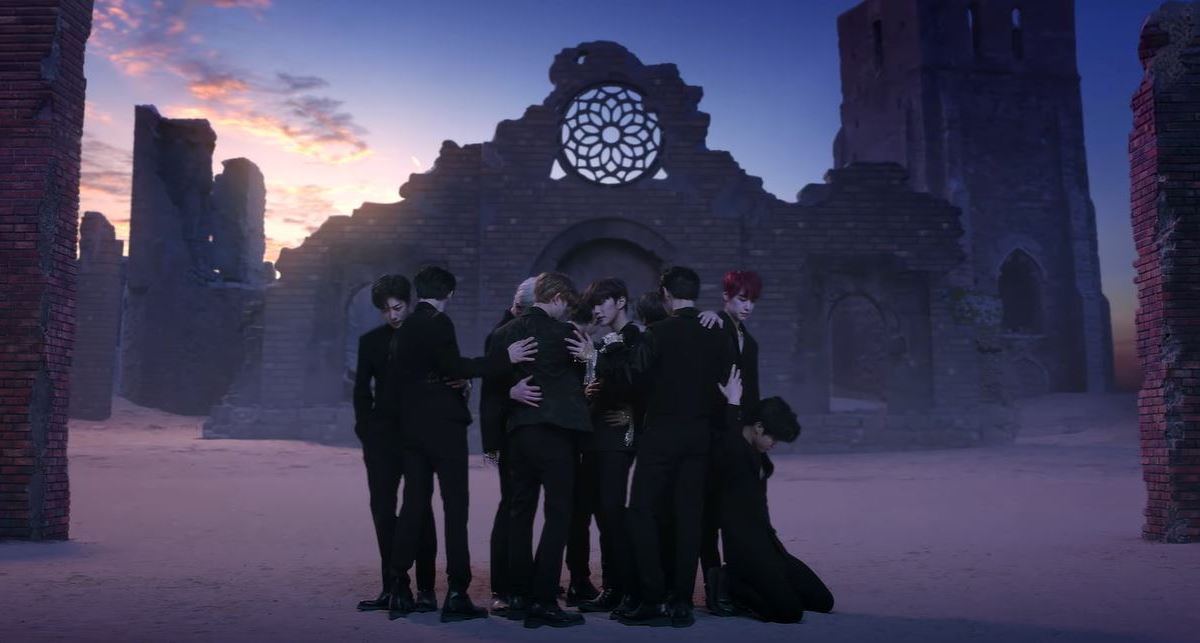 The other group to make a Monday comeback today is Golden Child, who returns with Burn It and the mini-album, Yes. Golden Child had a pretty big year and it all started in the preceding year of 2019 through their Wannabe comeback. The group went on to release Without You and One (Lucid Dream) to form a trilogy of releases in which Golden Child explores a darker and mature side. In the midst of these comebacks, they also partipated in Road To Kingdom, before ending the year with the more chirper release of Pump It Up. Golden Child continues to venture out with their new release, kicking off what should be another big year for the group.

Burn It aligns with their more mature releases. My first impression of Burn It was that it felt plain. But why does it have that impression? Well, each of the three releases that formed part of that triology I mentioned in the previous paragraph had a really strong hook that captured my attention. Burn It had a few good hooks, butnone of them felt as as explicitly upfront as those hooks I could easily identify from the other songs I am comparing Burn It to. The good news is that the few re-listens I have given the song today so far to prep for this review has helped the song grow immensely on me. Now I find that the reggaeton styled dance track actually feels quite modern and smooth. Oh, you will always be surprised what a few more repeats of the song will do to you. To enhance the sleekness of the song, there is a bit of whistling in the background to really help emphasis this side of the song. The vocal work and melodies really help in this regard as well. It is also the melodies that help drive the song forward. TAG and Jangjun’s rapping really had a nice kick to it, giving the song that needed intensity fix. I just do miss that centrepiece that draws you in from the first listen. But Burn It comes together to be quite a cohesive track, satsifying the reviewer in me.

Korean media is very big on zombies. There are dramas that features the undead creatures. There are movies that features the same undead creatures. And for a brief while, they featured in the KPOP music videos. But it has definitely been a while since we have seen a zombie themed music video. And Golden Child really went for it in a video almost 7 minutes long. I won’t get into the exact details, but there were many subplots within the video. Family, romance, friendship and sacrifice. The main story of the video revovled around the romance side of the video, where one of the members fight to protect the lead actress. But it turns out the lead actress was bitten and slowly turned into a zombie. In her final moments, she tells her lover to not come near her. But he embraces her zombie form. We can only assume that she turns him at the end (though there was no clarification of that). I do like the subplots approach, because I am sure each subplot represents something larger. The interlude music in the video was a bit cringy and cliche for my liking. But obviously it was there to help build suspense to the final outcomes of each of the subplots (or their cliff hanging enders). I also wished they didn’t include the choreography shots, as those time slots could have been used to explore more of the stories. Have a separate video for the choreography, similar to what T-ARA used to do with their Cry Cry and Day By Day music videos.

The choreography is definitely quite intense and complicated. I really liked that intensity they fuse into the post-chorus hook sequences of the choreography. I also enjoyed the graceful moments of the verses, which felt fitting for the music and helped show off more of their performance skillset. I also really liked how the enitre group was essentially in sync for majority of the performance, emphasising that sleekness and attention to detail once again.