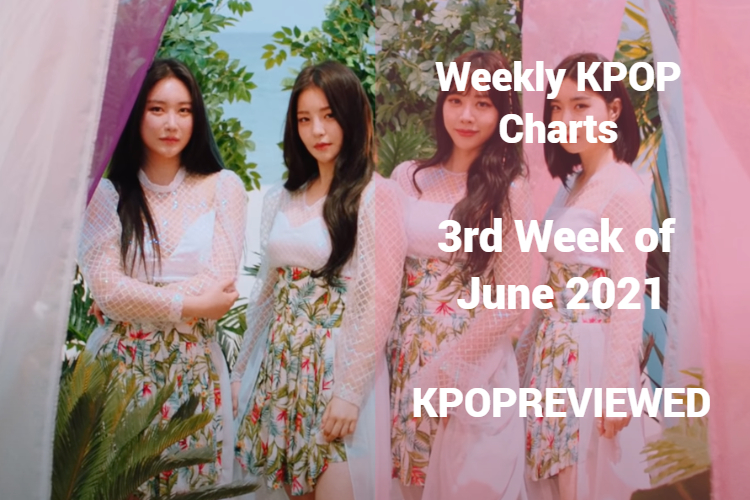 It is time for the next Weekly KPOP Chart post. Once again, I am posting a bit later than usual, as I had some personal stuff to work through today. But since I have wrapped that up (I think), I now have a bit of time to work on the blog, namely this Weekly Chart Post. I don’t think I will have time to write an album review today, so I will reserve that for next week. So before I procrastinate and fail to get this Weekly KPOP Chart post out, let’s move along with it!

There were a number of great releases this includes. The ones that I have managed to review already are UP10TION’s comeback with SPIN OFF, BamBam’s solo debut with riBBon, ONEWE’s comeback with Rain To Be, Brave Girl’s highly anticipated Chi Mat Ba Ram comeback and SEVENTEEN’s comeback Ready To Love. Other comebacks that occurred this week that I have missed include the release of BTOB’s Blue Moon (Cinema Version – which was performed on Kingdom), LUCY’s I Got U, and Yugyeom’s All Your Fault (which I will be combining with I Want You Around for a double review, hopefully for later this week).

This week’s throwback song is After School’s 2010 hit Bang, following the reunion stage of Jungah, Jooyeon, Bekah, Raina and Kahi under After School’s name on MMTG program. Definitely a song (and group) that deserves a comeback! They also performed Diva from 2009.

Congratulations to Brave Girls with their insanely catchy Chi Mat Ba Ram! This new song from this week tops KPOPREVIEWED’s Weekly KPOP Chart for the 3rd Week of June 2021! For more of the charts, continue scrolling down.

The following songs are leaving the charts following this week, and won’t appear starting from next week’s chart: