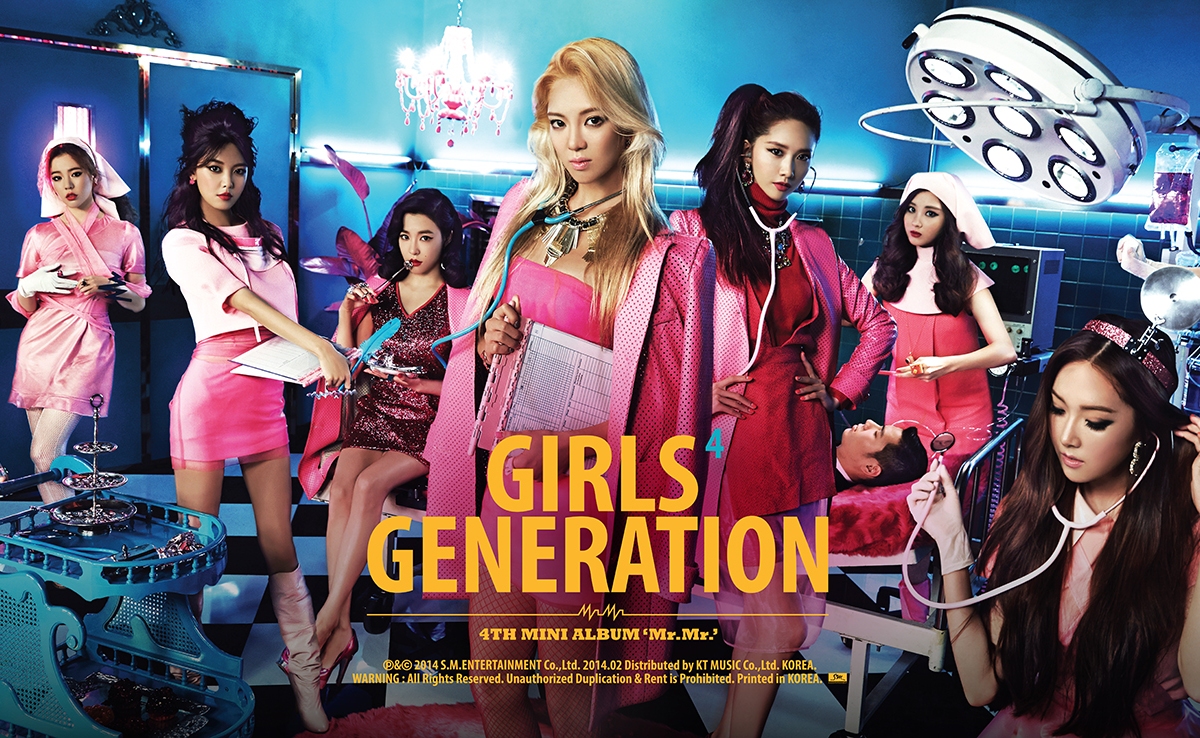 A few weeks or months ago, I flagged I would restart the ‘Past Album Review’ segment, which focuses on albums released in the years prior to the current year, come July. Unfortunately, some things have held me up from starting it at the very start of July (and just writing Past Album Reviews, in general). But now, I am finally getting around to it. First up is SNSD’s fourth and final (to date) mini-album, Mr.Mr. This and the title track of the same name was released way back in 2014, and was the final release to feature Jessica and a OT9 lineup. Since then, the group have largely focused on studio albums. Since 2017, the group has been on hiatus after some of the members parted ways with SM Entertainment, however that might change later in the year with rumours of a SNSD comeback. But until a confirmed release, here is a throwback to 2014 and the album Mr.Mr.

1. Mr.Mr (Title Track) – Excuse the cringiness in this review. I wrote this in my fetus years. Click here to read the full review for Mr.Mr. (9/10)

2. Goodbye – Goodbye is one pleasant track. But I say that in a really positive manner. Goodbye was a great showcase of simplicity, with every element feeling quite simple. The entire song has a feel-good vibe to it, with the rock-pop instrumentation taking on a bright profile. This is in direct contrast to the lyrics, which are all about leaving a relationship you know that just won’t work out no matter what you try. The vocals are straightforward and have a sweetness to them, which tells me that they have come to terms about the relationship I mentioned above. The melodies within Goodbye were also simple and easy on the ears. Overall, a really satisfying song. (9/10)

3. Europa (유로파) – I really like the disco profile of the instrumentation in Europa, which feels perfect fit for the influx of cutesy songs back in the day and gives off a sense of nostalgia. Unfortunately, I feel the rest of the song is rather jarring. Europa isn’t a cohesive track, but the standalone elements were good. The vocals just doesn’t piece together as nicely (though these do also give off a sense of nostalgia, reminding me of SNSD’s earlier works when they sang together), and the additional detailing in the instrumentation felt like they don’t compliment the rest of the instrumental. (6/10)

4. Wait A Minute – I would never have thought that Wait A Minute and Mr.Mr would be on the same album. Wait A Minute has this heavy sweetness within it that just directly contrasts with Mr.Mr. It is still a decent song, however. It is upbeat and has a nice energy to it. The vocals were also nice and appreciable. I think Wait A Minute’s main issue was its instrumental. It is decent, but I don’t think the electronic nature of the instrumentation was right. I think I would have enjoyed the song more if it had a more ‘traditional’ jazz profile to it. (8/10)

5. Back Hug (백허그) – Back Hug is the album’s sole ballad. The ballad doesn’t opt for the traditional ballad style of classical instrumental. Instead, Back Hug opts for mainly acoustic guitars (with the appearance of classical strings). It is a nice change of style and keeps the album light (which I think is a theme with all these side tracks so far). The members sound really nice and heavenly throughout Back Hug. (8/10)

6. Soul – Based on what I understand, Soul is the Korean version of the group’s first Chinese single, Find Your Soul. While that is the case, I am here to review the version on this album. The instrumental has this pop edge to it, which has potential. The start in particular was quite interesting and I would have liked the song to build upon that more. The issue with Soul is that I feel the vocals could have been punchier to really give the song more effect and drive. (7/10)