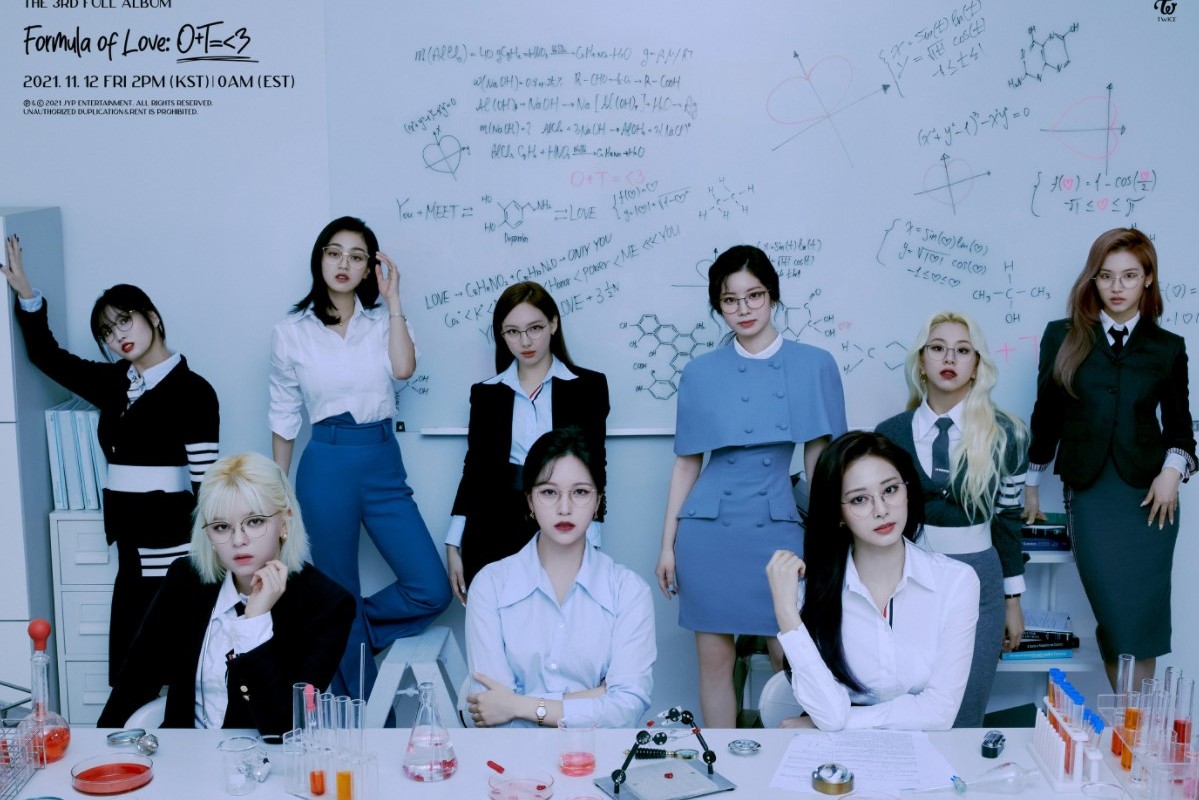 TWICE is nominated for Best Outfits (for their attire during their Alcohol-Free promotions) and Best Female Choreography (Group) for Cry For Me in the 2021 KPOPREVIEWED Awards. Support TWICE in their categories by clicking here to vote for them.

The first album for review this weekend is TWICE’s Formula of Love: O+T=<3, their third studio album since debut. It features the title Scientist (previously reviewed and factored into this album review), a remixed version of the title track (not reviewed) and the English (factored into this album review) and Korean version of their single The Feels (not reviewed), and 13 new tracks (all reviewed below and factored into the album review). That is a whopping 16 tracks in total. This new album tackles the funky and groovy side of music, with a few distinct outliers. Read on to find out which ones are ‘funky and groovy’ and which ones are the outliers.

2. MOONLIGHT – Following the title track is the all-English MOONLIGHT, which is reminiscent of 80s/90s female pop groups. There is this twinkling touch on top of the groovy disco influence that feels appropriate for that era. It is a pretty smooth and pleasant number, with nice melodies and innocent vocals from the members. I did wish it changed it up a bit towards the end, as I feel MOONLIGHT is a tad too consistent. But overall, an enjoyable listen. (8/10)

3. ICON – ICON is the second all-English track on the album. I really liked the confidence and empowering nature behind the English lyrics of ICON. And I get that same exact feeling from the members as they exclaim the ‘’Damn, I got it, I’m iconic!’ line (which is a very catchy and memorable hook, by the way). Instrumentally, I thought ICON was a bit meh and wished it enable a more sassy vibe. (8/10)

4. CRUEL – CRUEL is a very sleek and sexy pop number. TWICE’s vocals really standout in this song, especially during the chorus where they use falsettos to make CRUEL iconic (relative to the rest of the album). I was totally digging it! I also like the subtle groovy touch to the instrumentation, which made me want to get up and dance. (10/10)

5. REAL YOU – Another track that I am very willing to get up and dance to. But it isn’t as great as CRUEL was. My first impression of REAL YOU was that there was a fair bit going on when it came to the instrumentation. Repeat listens since the album was release have neutralised that thought. Now, I like the grooviness and upbeatness that the instrumental brings, even though I find it a tad squeaky. All the members sound great, as well. (9/10)

6. F.I.L.A (FALL IN LOVE AGAIN) – TWICE is nailing the groovy and funky sounds on this album. F.I.L.A is a disco pop song, which chorus reminds me of Saturday Night Fever. I like the softness of the vocals in this song during the verses, and the deep rapping that we got. It contrasts well with the higher pitched and much more powerful vocals during the chorus. (10/10)

7. LAST WALTZ – LAST WALTZ gives off a mature vibe that hasn’t been heard on the album yet. It is sensual, but also adds onto the album’s funky direction in a subtle manner. The members sound great in this track, though I wished the flow of their lines was a bit more cohesive. They sound rather jaggered, and this didn’t come off as pleasant as it could have. The rapping stands out in this track, with the relevant members slaying their delivery! (8/10)

8. ESPRESSO – Whatever I had in mind for ESPRESSO, the final product was not it. I expected café style music for some reason, but instead we got a heavy dance club track. I like this change in sound. Its even more mature than the previous track, and I can imagine a very classy and mature performance concept for ESPRESSO. The song contains some really good hooks that make it even better, such as ‘E.S.P.R.E.S.S.O That’s who I am’. (8.5/10)

9. REWIND (알고 싶지 않아) – TWICE tones down the music with the presence of REWIND, a R&B number. A very typically instrumented R&B track in my opinion, but the vocals are very soothing and gentle in REWIND. A nice relief after such energetic, upbeat and funky tracks. (8/10)

10. CACTUS (산인장) – CACTUS continues this subdued corner of the album. This time around, the song opts of a pop rock ballad. It sounds stunning. I really like the softer moments of the song, which align itself to more so the ballad style, while the chorus brings forth a rock influence to the ballad. The members sound amazing , with the harmonies being a strong aspect of CACTUS. (10/10)

11. PUSH & PULL (Sana, Jihyo, Dahyun) – Starting off the series of unit tracks is Sana, Jihyo and Dahyun with PUSH & PULL. It is also a return to the album’s funky and groovy roots. It is a neat track and is a great return to the upbeat side of the album. I like the rapping in this song, which made it dynamic and appealing. I also really like the defined percussion when it came to the pre-chorus, Definitely hyped up the song for me. (9/10)

12. HELLO (Nayeon, Momo, Chaeyoung) – Nayeon, Momo and Chaeyoung delves into hip-hop roots, which is a definite change in direction from the group’s usual work. While I am a strong advocate for changing up sounds once in a while, I am not entire sure of what to think about HELLO. The last two things that should go together is TWICE and hip-hop. I just feel like they are two extremes that so far apart. However, HELLO is decent track. It is also rap heavy, as you would expect with most hip-hop centric songs, but this one isn’t as good as compared to the previous song. (7/10)

13. 1,3,2 (Jeongyeon, Mina, Tzuyu) – The final unit track on the album is 1,3,2, which comes courtesy of Jeongyeon, Mina and Tzuyu. The song is a dance track with reggae influences and I feel this is a really good sound for not just the unit but possibly the rest of the group! Overall, 1,3,2 comes off a mature track, with strong and catchy melodies, neat vocals and very intriguing rapping. I think 1,3,2 is probably the strongest and most innovative unit track on this album. (9/10)

14. CANDY – CANDY is the final new offering from TWICE on this album (the songs that follow are songs we have previously heard from the group). It is a dreamy ballad, with a melody that felt very sweet, like the title of the song suggests. It also reminds me of the 90s R&B. The vocals are nice and I like the high falsettos/harmonies that CANDY had. It made everything sweeter! (8.5/10)

15/16. The Feels – I previously reviewed The Feels as part of the International Song Review segment. This album features a Korean version (only on the physical version) and the original version. Click here for my review for The Feels. (9/10)

17. Scientist (R3hab Remix) – Refer to my review for Scientist above.