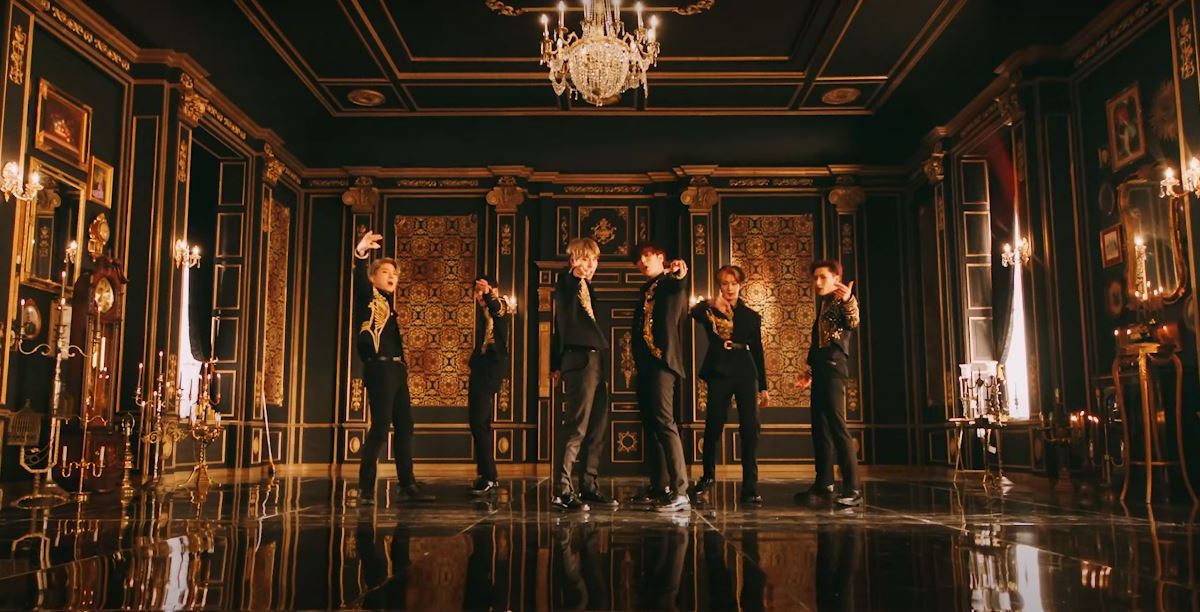 Also making their comeback today is MONSTA X with FANTASIA. This is a big comeback for the group as it is the first official comeback that does not feature Wonho, who left the group during their Follow promotions back in October 2019 (which is also their most recent comeback). The comeback also features the return of Joohoney, who took the last 3 months off from promotions for health reasons (he has been missing from their recent Japanese releases). FANTASIA was previously scheduled for an early May release, but was rescheduled to today after Shownu suffered an injury prior to their comeback date. Let’s see what MONSTA X offers with FANTASIA.

FANTASIA is no light track. From the very first second, the song hits you with its fierceness and intensity, something that we know MONSTA X for. This manages to somehow one up all their previous releases, in a way that I didn’t think was possible. But MONSTA X knows how to push it each time they comeback. The instrumental features a tribal and anthem-like thumping drum beat. The bass was heavily used, giving the song that epic feel. As for the members, I thought each members managed to shine during their sections. Joohoney’s intense rap sequence kicks things off, before the baton is handed to Kihyun and Shownu in the verse, who both brought their vocal chops to the table. We are then thrown into the chorus, which is lead by Minhyuk and Hyungwon. I was surprised about this as it is usually the main vocalists that dominate this section of the song. But I really like this flip and the texture these two members give the chorus. For a split second, it felt like the producer tones the energy down ever so slightly during the chorus. But the momentum was somehow continued effortlessly. I did also like the layering of vocals in the post-hook section. I.M opens up the second verse with another powerful rap sequence, before we are thrown back to the main vocalists and the rest of the song repeats itself (but not in a repetitive manner). The most powerful section has to be the first half of the bridge, where the thumping seems to be more drawn out and dramatic. The song then ticks the energy down a bit in the second half, so that the entrance to the final chorus is powerful. Overall, no doubt a powerful song that I personally like. Though, MONSTA X should start to consider that this sound is overwhelming for some and I am not sure if they fair well in the next review if they up the intensity to a higher level.

What did I like about this video in a visual sense? Well, the gold pairing with black is definitely something. I really liked it. While the sound is extremely powerful and a little barbaric in a sense, the set really gives off a refined and elegant vibe. In a way, the visual video prevents the song from going into that overwhelming mode. Out of all the members, Joohoney left the biggest impression on me with his chains and cow boy hat. I also wonder how the comeback links up with Follow, as I am reading that the two are connected. This can happen on many levels, but it is usually done through the music video. I just don’t see any visual connection other than the sun or burning planet at the start.

MONSTA X has described this to be their hardest choreography yet. And I believe them. With a song this intense, it only makes sense for their choreography to be amped up. I am in awe that they managed to pull ths off and probably will do it with live vocals, as well. I really like the crab-like movement during the post chorus hook section and bridge. I also liked how Kihyun got solo moments in the choreography during the verses.