Surprise! Another album review this weekend. I felt like I was cheating the system by reviewing just one single album today. So I thought, why not review another single album! Luckily, WOODZ also released a single album around the same time as the album I had just reviewed. WOODZ’s single album is titled SET and features the title track FEEL LIKE. It is, too, his first single album since his solo debut. It also follows the release of Woops, which I had reviewed late last year. The songs on Woops faired quite well, so I couldn’t wait to sit down and write out my thoughts for the new side tracks on this single album, so continue reading on if you want to know what I thought about SET.

2. Touché (ft. Moon) – WOODZ brings out his vocals in Touché. It is one of the highlights of the track for me. I also like the lines in which he finishes off with spoken delivery, which were really smooth and gives the song that depth of dynamism. Aside from the soloist’s vocals, Touché is a sensual R&B track with Latin-influences. Interestingly, the Latin influences don’t really become that prevalent until Moon (the featuring artist) comes into play towards the end of the song. But you can definitely feel those influences bubbling away in the background, waiting for it emerge as a centrepiece. In addition to WOODZ, Moon’s voice is stunning in this song. And their harmonies at the end were really captivating. Overall, Touché was a breathtaking song. (10/10)

3. Rebound – Rebound also taps into the R&B genre. But I feel Rebound is a highly concentrated steamy number that promises a very alluring and captivating performance when the time comes for one. It is also a song sung in English from start to end. Rebound without a doubt showcases his vocals. It not only compliments the sensual nature and pace of the song, but also really emphasise his falsetto vocals. And if you enjoy them, I recommend that you check out WOODZ’s Accident from his first mini-album, which also involves some unique instrumentation. Here Rebound stays more traditional, but definitely captivates. (9/10) 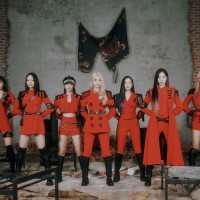