Quick comebacks do not happen often (not counting pre-releases, as we are usually given a heads up to the bigger releases that would follow shortly), but they do occur from time to time. And the most recent group to attempt this feat is VERIVERY. Just a month ago, the group dropped their digital single O, which I described as ‘a solid track from start to end’. No one was aware that the song would ultimately serve as a side track on the album that would drop after a months time. Fast forward to earlier this week, the group returned with their first studio length album, Series ‘O’ Round 3: Whole, and the title track Undercover.

If Undercover and O were compared to side by side, O would emerge as the superior song. My thoughts on the earlier track have already been documented in its own review. In regards to Undercover, it is considerably underwhelming. Personally, I think the start of the song and the first verse was just fine. The preachy sample that kicked off Undercover was intriguing. But the verse was quite plain, and plain is never a great impression to start off with. But I have heard songs recover from such starts. Unfortunately Undercover doesn’t do this and just proceeds to the chorus without any acceleration, ramp up or intense building of any sort. Within the chorus itself, there wasn’t any memorable synths, hooks or melodies that would have made Undercover engaging for me. And then the cycle continues onto the second verse and chorus. It is not until the bridge does Undercover gets interesting thanks to the guitar work. There was some guitar work with potential in the verses/chorus to begin with, but they didn’t really make much of a statement until the bridge. From the bridge onwards, the guitars definitely added an oomph factor (however, subtle though) to the song, which I would emphasis as much needed. The guitar work continues on, and paired with the bass ended up being quite appealing to me. The deep vocals and the rapping that follows closes out Undercover was miles away in terms of strength and memorability to what the song’s centrepiece was. Overall, Undercover was quite lacking for majority of its body and needed something dynamic to spruce up the song. As result, it underwhelmed.

Unlike the O video, I might have a bit of an idea of what is going on in the video (but I am not entirely too confident about my interpretation). The Get Away music video introduced the idea that there were alternative versions of each member. And from the ending of Get Away, the alternate versions take over their identities in the ‘real world’. In TRIGGER, the group we see are the main character are the version of the group that died in the previous video. They are tormented by a different version of themselves, but end up escaping after the circular building collapses (which opens this video). In this video, the members escape and go on the offense, by seeking their alternative selves (that took their lives in Get Away), defeating them and restoring the balance between the two worlds (based on the barrier between the two sides at the end of the video). That is my best guess to what is going on in this universe of different worlds, though I am unsure how O fits into the video. Maybe that can be an investigation for a future Music Video Theory series.

The stage performance helps makes the song feel a lot more dynamic. This is a good definitely a good thing, as without it, the entire comeback would have become lacking. While the routine is good, there just wasn’t much within it that was memorable.

One thought on “[Review] Undercover – VERIVERY” 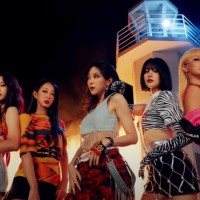