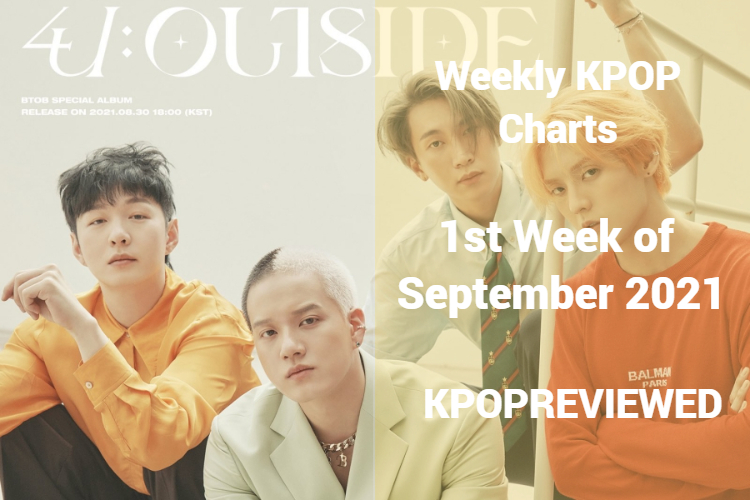 And we begin September! It has felt like time has been going by so quickly lately, even though I am stuck at home (still in lockdown 😟). With my move officially completed (and I have a proper desk!), I will use my free time I have stuck at home to focus on the blog. I started this officially yesterday, with three reviews crossed off. And I will try my best to keep up with the constant releases and also the bouncing around to ‘old releases’. But before I can proceed forward, here are the Weekly KPOP Charts for the 1st Week of September 2021.

Please note I realized I had stuffed up the rankings changes (i.e. the status column) of last week’s Weekly KPOP Charts. The songs were in the right positions, just the numbers of spots that they dropped or increased by were incorrect. If you would like to look over the new information, please check out the post for the 4th Week of August 2021.

New releases of the week

I have only managed to get around to reviewing BTOB’s Outsider, fromis_9’s Talk & Talk and A.C.E’s Changer this week. But these aren’t the only three releases that were dropped during the week. Many other songs were released alongside those three (listed below). These songs are also eligible for placement on the charts and some will be reviewed some time in the future.

I was in a Pentagon mood this past week. And Daisy was the most listened to song of the week on this Pentagon binge. Unfortunately, their recent release (Cerberus) just didn’t make it into this week’s binge session.

Congratulations to BTOB, who recently released single, Outsider, had managed to clinch the top spot for this past week. For more of the charts, check out below.

9 weeks have passed and the following songs have been removed from the charts to make room for new songs: