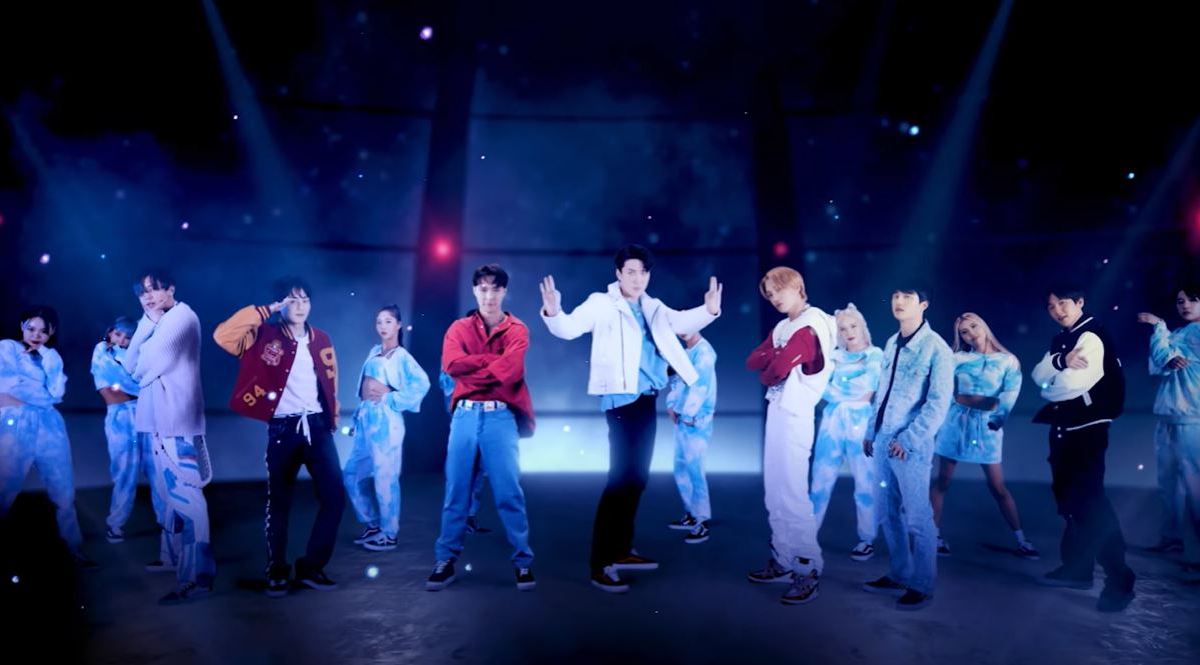 EXO IS BACK! That is the first time I am saying that since their last ‘full-group’ comeback under the name of EXO with Obsession (both the name of the title track and album) in 2019. The main reason to the almost two year hiatus is because of military enlistment. Even during the Obsession comeback (and even today’s comeback), EXO has a few members currently enlisted in the military. And in 2020, it was announced that EXO would focus more on solo and unit promotions, with the successful debuts of Suho and Kai, and the successful comebacks of Baekhyun (Candy and Bambi), Lay and EXO-SC. But today, we welcome back EXO through the release of a special single, Don’t Fight The Feeling, which features members Xiumin, D.O (both who have returned from the military), Chanyeol, Baekhyun (both who have just enlisted), Lay, Kai and Sehun. This comeback also marks the first time Lay has featured in a comeback since 2018’s Tempo. Suho and Chen are currently on hiatus due to their enlistment (alongside Chanyeol and Baekhyun). Okay, formalities out of the way, let’s have a closer listen to Don’t Fight The Feeling.

Described as a dance song with a ‘cheerful rhythm’, Don’t Fight The Feeling really delivers with its upbeat instrumental and catchy lyrics. If you are looking for the usual serious and mature sound from EXO, this isn’t the song you are looking for. But if you are looking for something upbeat and vibrant as Love Me Right or Power, then Don’t Fight The Feeling is what you be looking for. I really like the no nonsense approach the song has when it came to its instrumentation. From the very start, you could feel what the song’s description was stating. And as the song went on, the synths gave off a funky vibe (which is a very 2020s thing), while the bass gives the song its depth. I do dislike the inclusion of the trap-based background for the rap sequences, with its stripped back nature being a bit too standard for my taste. I felt that these part could have been a bit more enticing with something a little more original. Overall, it is a really cool instrumentation that gives you in the mood for a bit of a groove. The chorus was catchy with the repetition of the song’s title and the overlapping of vocals. This technique really kept the song going and helped key the song’s hook into your mind. Though, I would have liked to hear a more dynamic hook to the song, but what we got in Don’t Fight The Feeling was satisfying nonetheless. When it comes to the vocals and rapping, it is definitely great to hear everyone again. There wasn’t anything as explosive with their delivery however and I didn’t think any member stood out of the pack. That’s fine though, because EXO still gave us a satisfying showing of their vocals. But while that was the case for the overall song, it was definitely nice to hear Xiumin, Lay and D.O, as it has been a while since we have heard from them. As for the rapping, what we got was okay. But it wasn’t really the best showcase of Chanyeol or Sehun’s skills. I think if the producers went with a backdrop that flowed with the rest of the upbeat instrumentation’s momentum, it would have worked more in Chanyeol and Sehun’s favour. Personally, Don’t Fight The Feeling is a really good return for the group and a song I wouldn’t mind casually replaying. It isn’t until I sit down to consider the elements individually, that I find myself slightly disappointed.

Don’t Fight The Feeling‘s music video fits into the new SM cinematic universe, which appears to revolve around KWANGYA (the planet in which aespa’s virtual members live on). As the lyrics, I think that members have to travel through KWANGYA to EXO-Planet, which is EXO’s destination in this video. I think that is a nice tie into the cinematic universe, but also keep EXO’s storyline as its own separate entity. As for the visuals of the music video, I thought it looked quite cool, with the spaceship and air-craft carrier. It was definitely nice to see most of the group on our screens, as well. Lay also made an appearance during his solo part. Though, it is clear he had to film elsewhere (most likely China) and the editor(s) inserted him in later. Everything was all good until we got to the final scene, where the members are all partying up and we see a snippet of the choreography. I am happy they inserted Lay into the choreography shot, bringing EXO together once again. But the green screen usage at the end was pretty poor in my opinion, and I felt like this impacted the quality of the music video in the end. The video just didn’t feel great anymore, thanks to the ending.

The choreography definitely looks cool, and I am glad the green screen didn’t ruin this aspect. It is definitely more lighthearted and not intense as EXO’s usual style, but I attribute the change to the music which calls for a lighter set of moves. I liked the chorus, when they do pivot with their arms stretched out in a diagonal fashion.

One thought on “[Review] Don’t Fight The Feeling – EXO”